more about boston ... from the home of billy 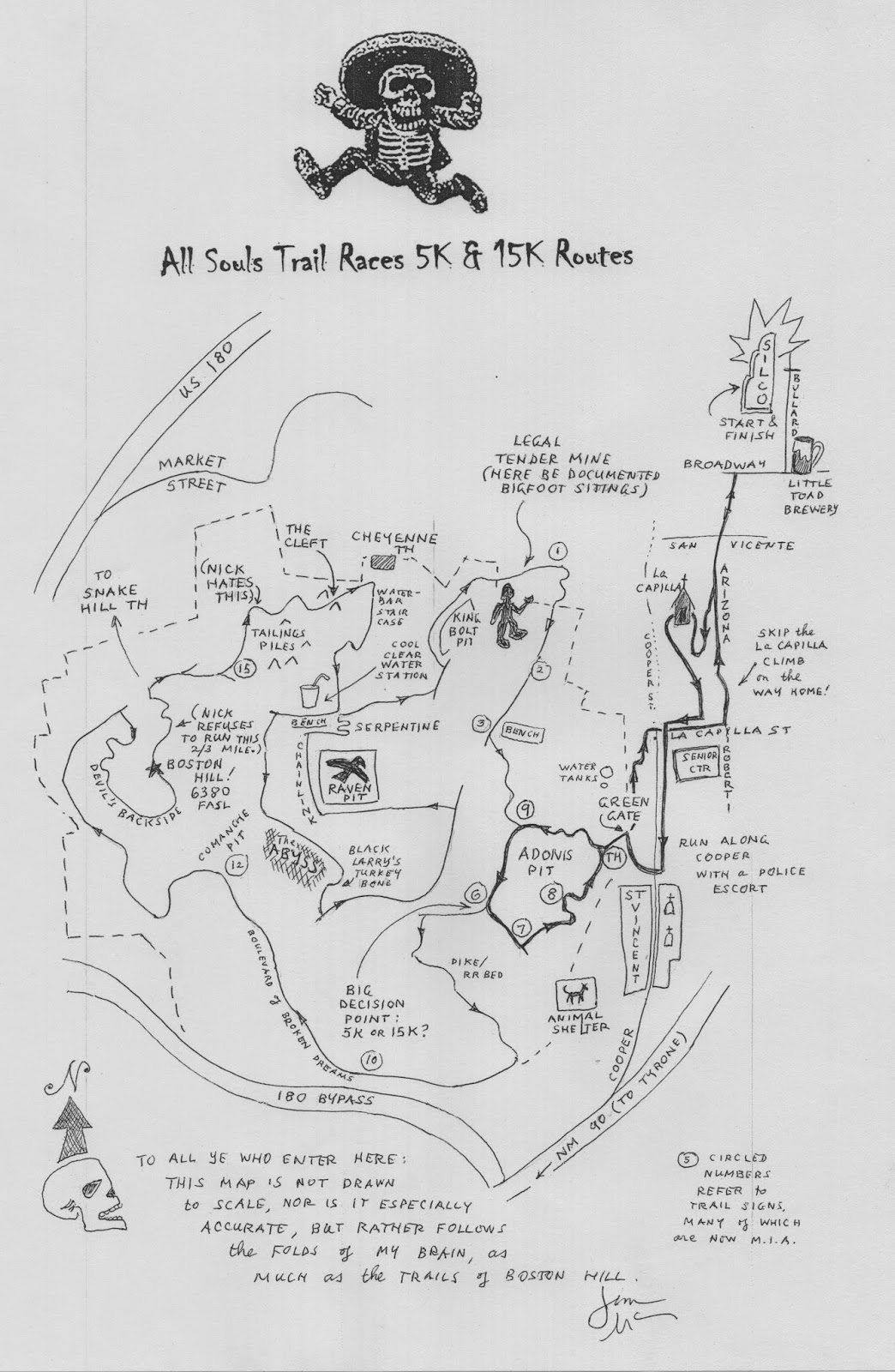 If I had seen this before I registered, I don't think I would have run the race ! But what a great map .

And this from Jim McIntosh , who not only set it up , directed etc ... but managed to run 3rd in a decent 10m time ( my time was a PW for a 1/2 ... not counting Farmingtons version of this torture )

Attached is a map of the All Souls courses, in case you want to prepare yourself for the race by running it beforehand.  To be honest, I'm not sure this is such a good idea.  (You'll know what I mean when you start running up Arizona Street.)  But if you'd like an orienteering exercise, a good dog walk, or a remarkably scenic & savage family outing, print the map, get your compass, & off you go.  Please note the disclaimer at the bottom of the handdrawn map."

My friend & frequent race organizer Bob Schiowitz took his GPS for a stroll on our 15K course (more of less) & sent me this gem of a course profile.  I was so proud of it, I had to send it to you all.  "Check out the elevation profile below," Bob wrote.  "You’ve outdone your sadistic self on this one. As you probably realize, this is a hill climb that averages 5.8%, with maximum ascents/descents of almost 20%."

The course profile is particularly helpful as you make a mental map of your coming ordeal.  You will note that this course, like the city of Rome, has seven hills.  They are, in order:  La Capilla, Cemetery Point, the Boulevard of Broken Dreams, Boston Hill Proper (via the Devil's Backside), Turquoise Vista, Raven Pit, & The Sotols.  I figured naming it all would bring you a certain comfort. 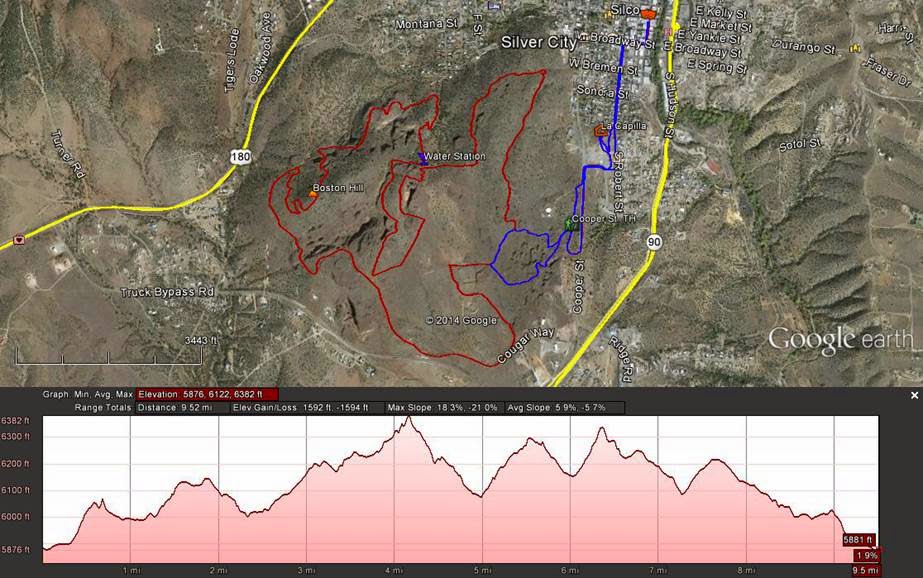 and in closing I would like to repeat,  that Carlos from  Run Culture  said this race wouldn't be too hard !
Posted by songrunner at 2:29 PM No comments: 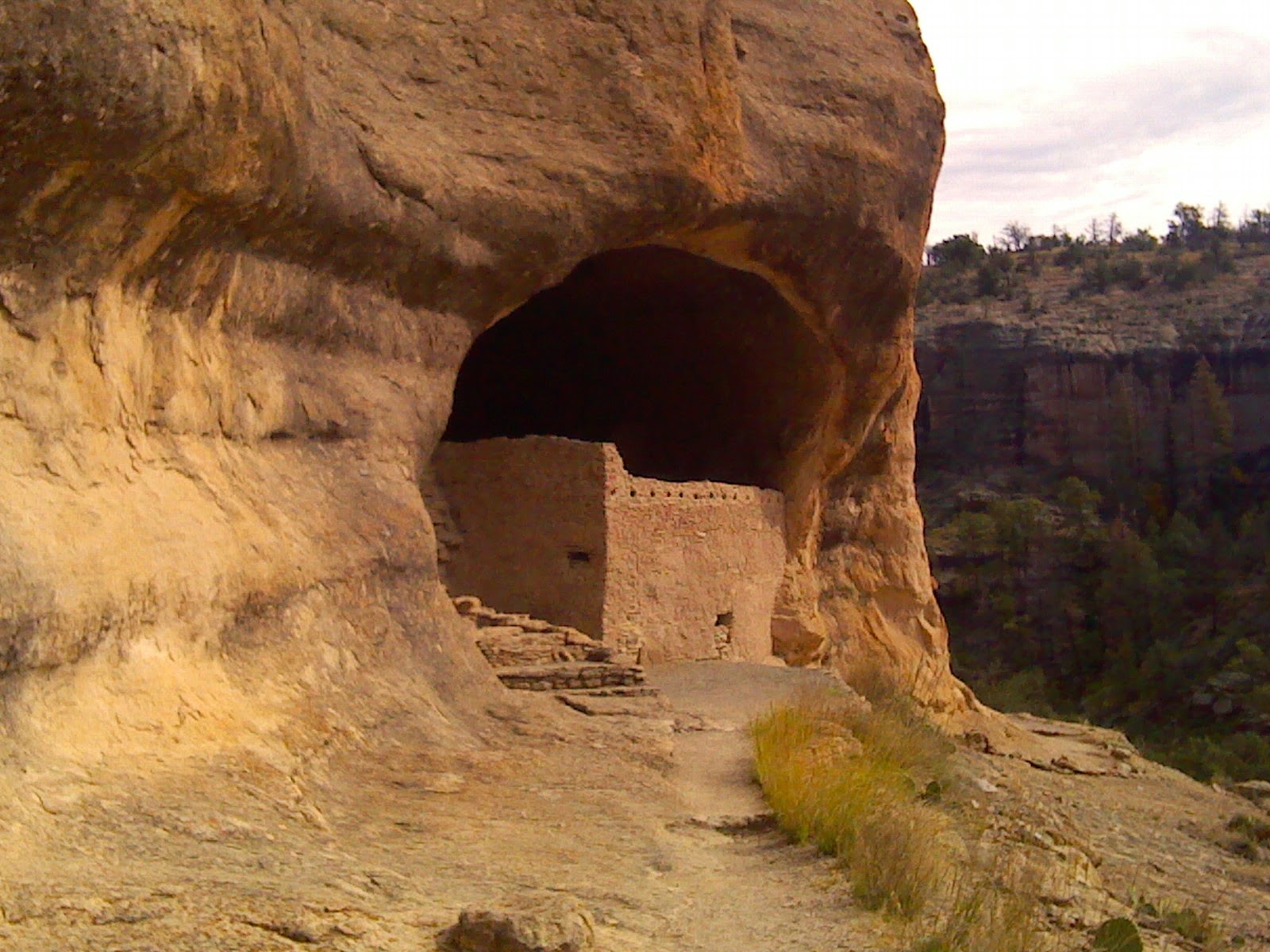 the Gila wilderness was the nations first designated Wilderness . It was home to remarkable ancient cultures and unique eco systems . The Gila cliff dwellings . The home of Geronimo . Ancient Calderas . Great hikes . Before the Cliff Dwellings were built in late 1200s,  the Mimbres & Mogollon lived here producing some of the greatest SW pottery

I drove out from Silver City and camped in a great forest above a blown out ancient volcano . did a nice hike to Gila Cliff dwellings . 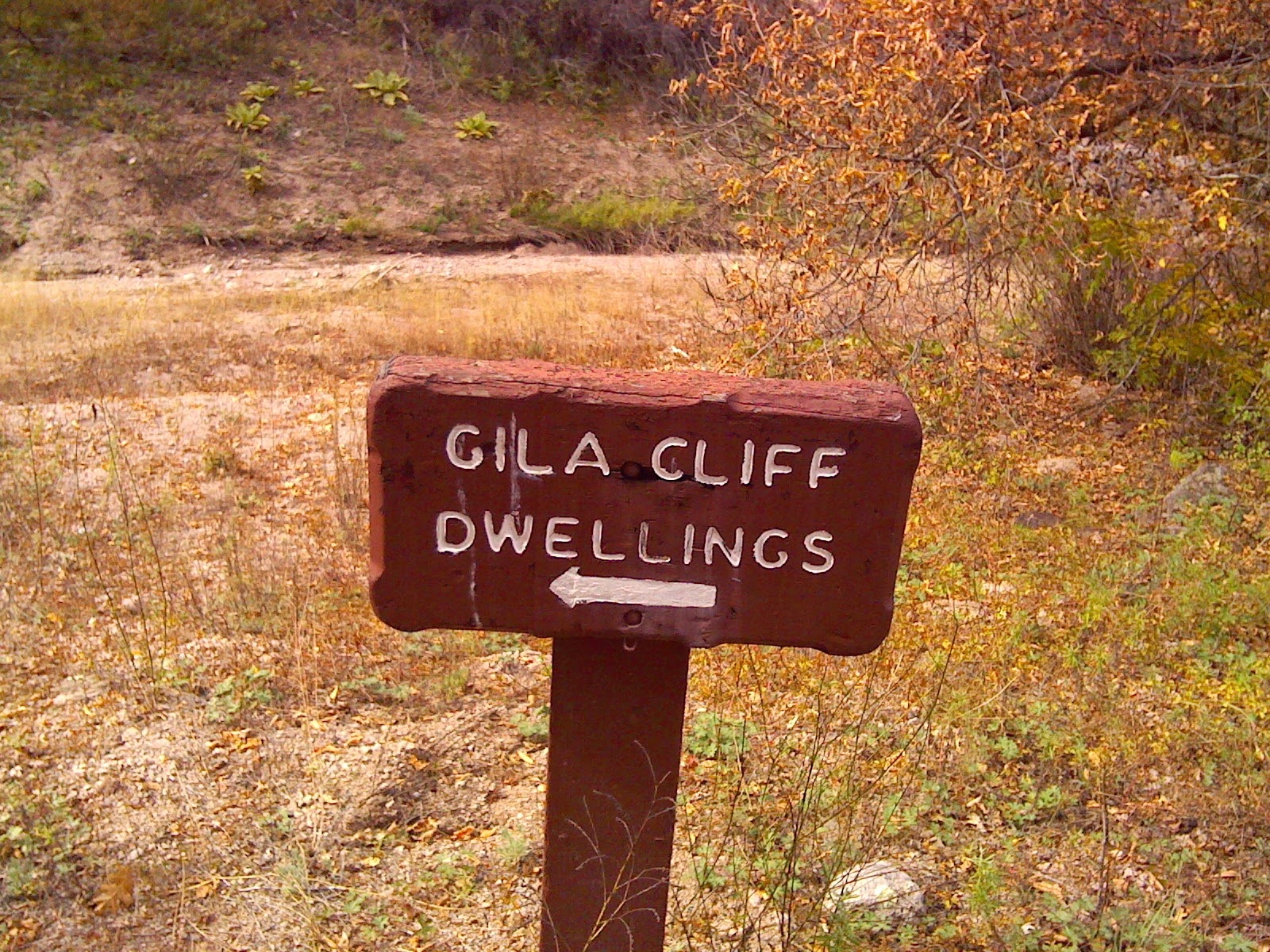 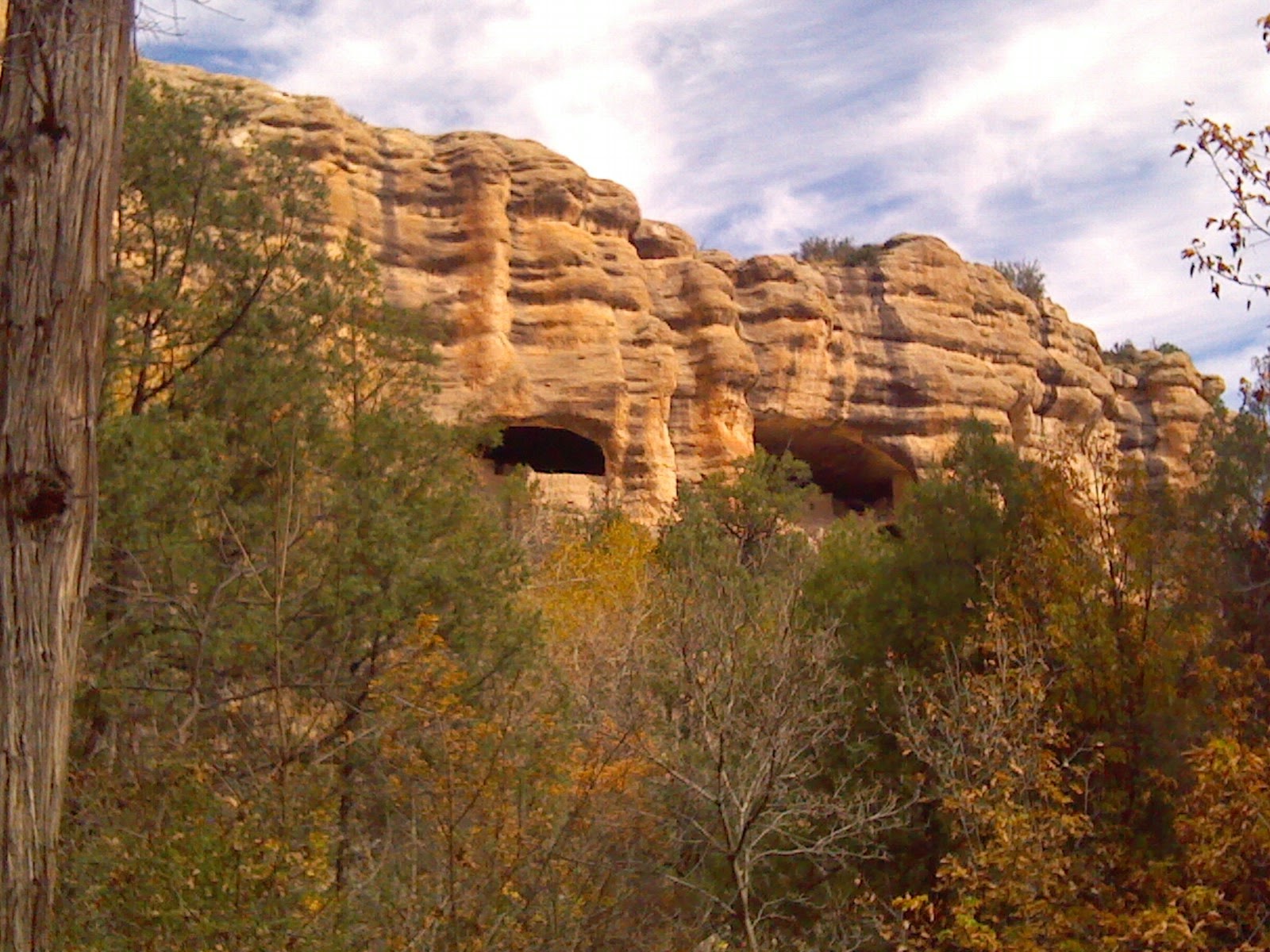 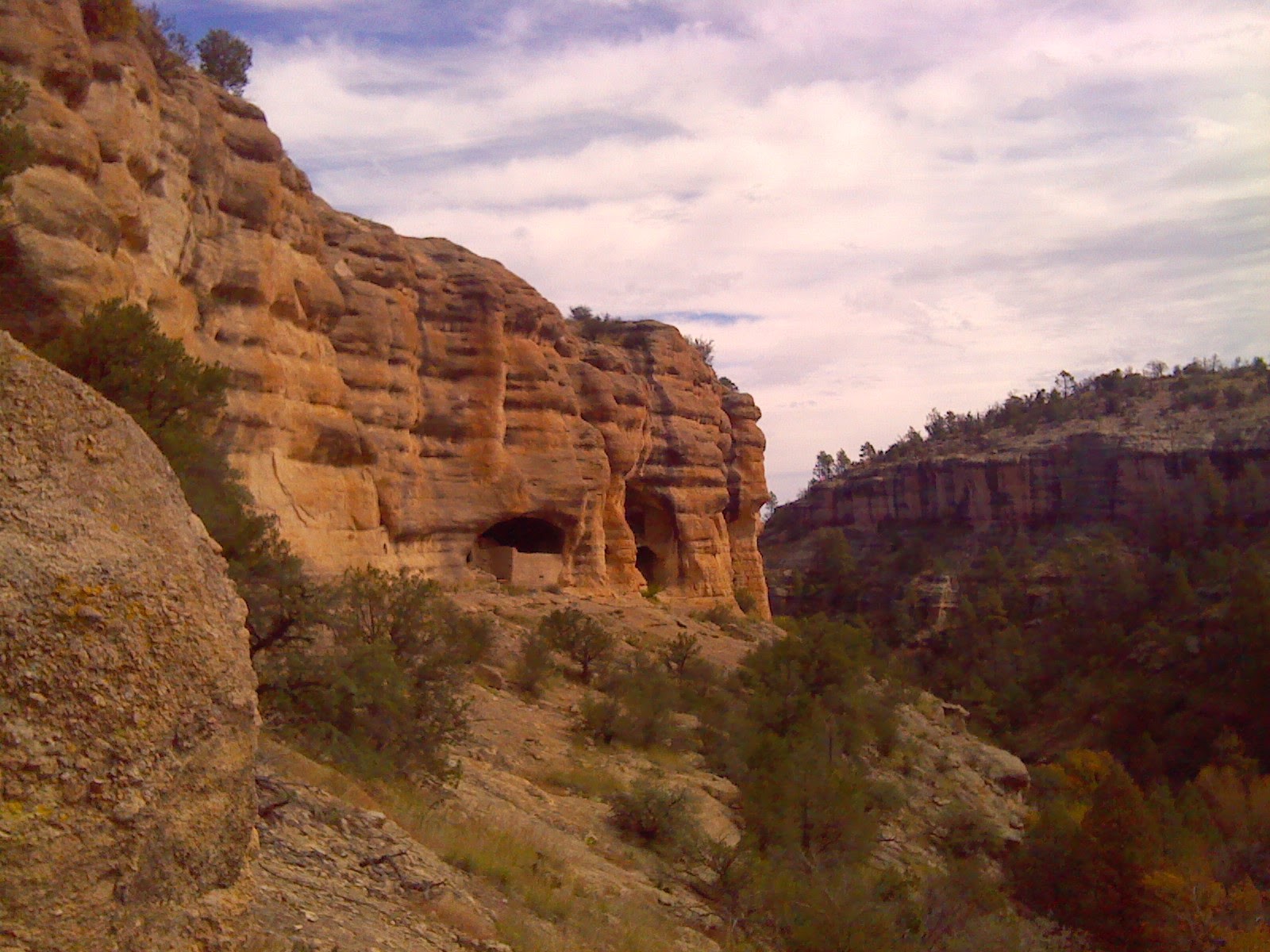 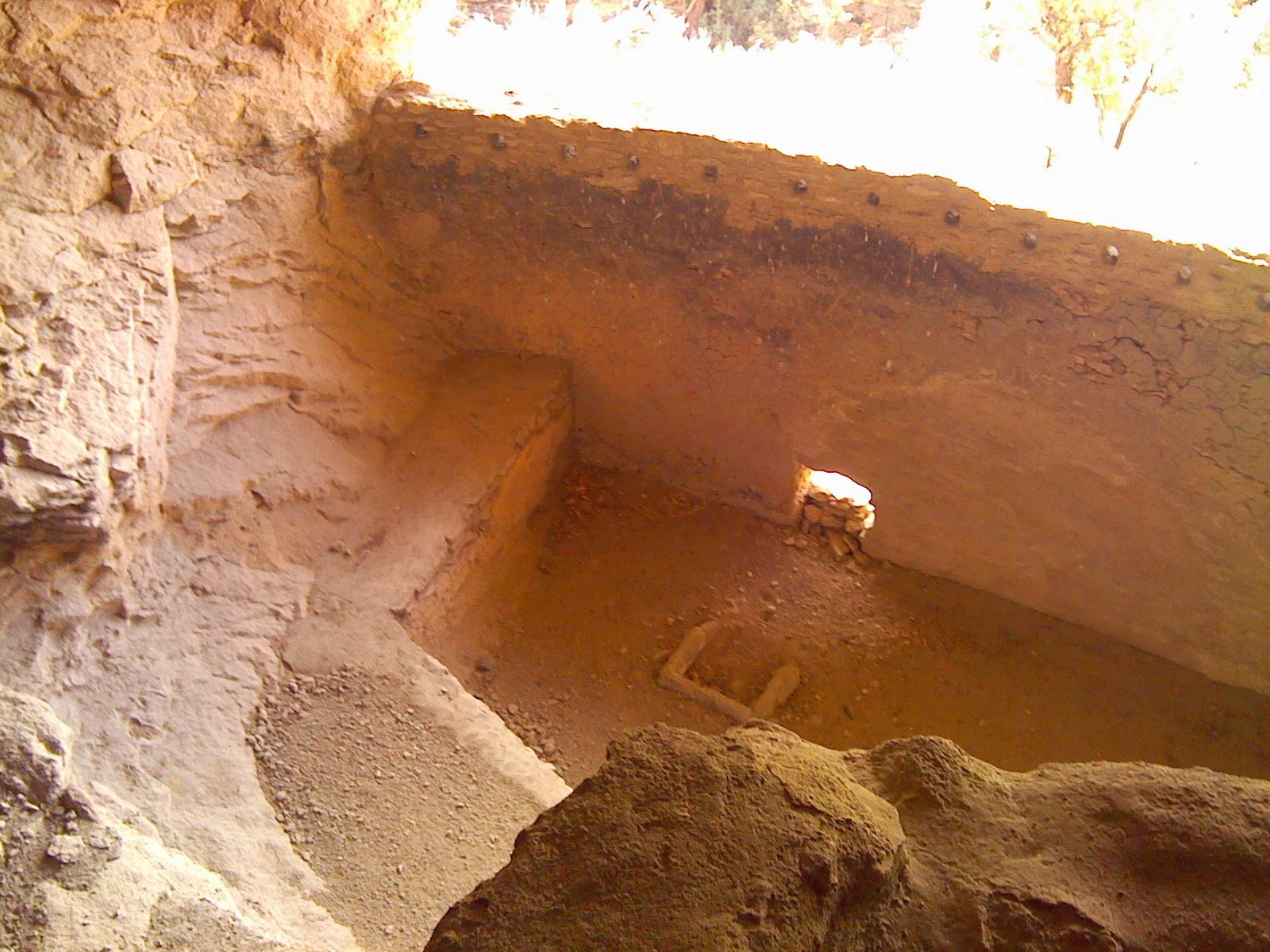 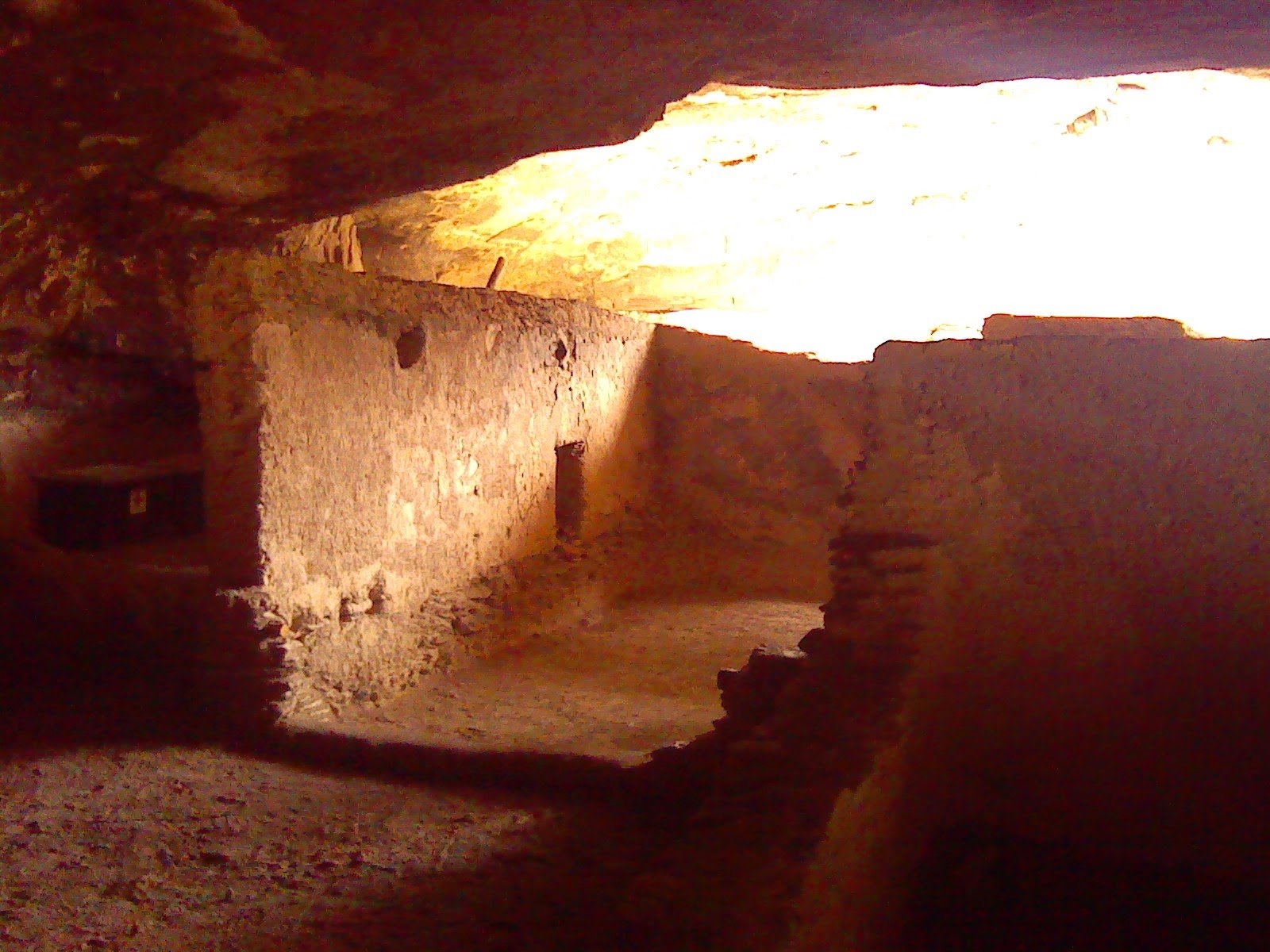 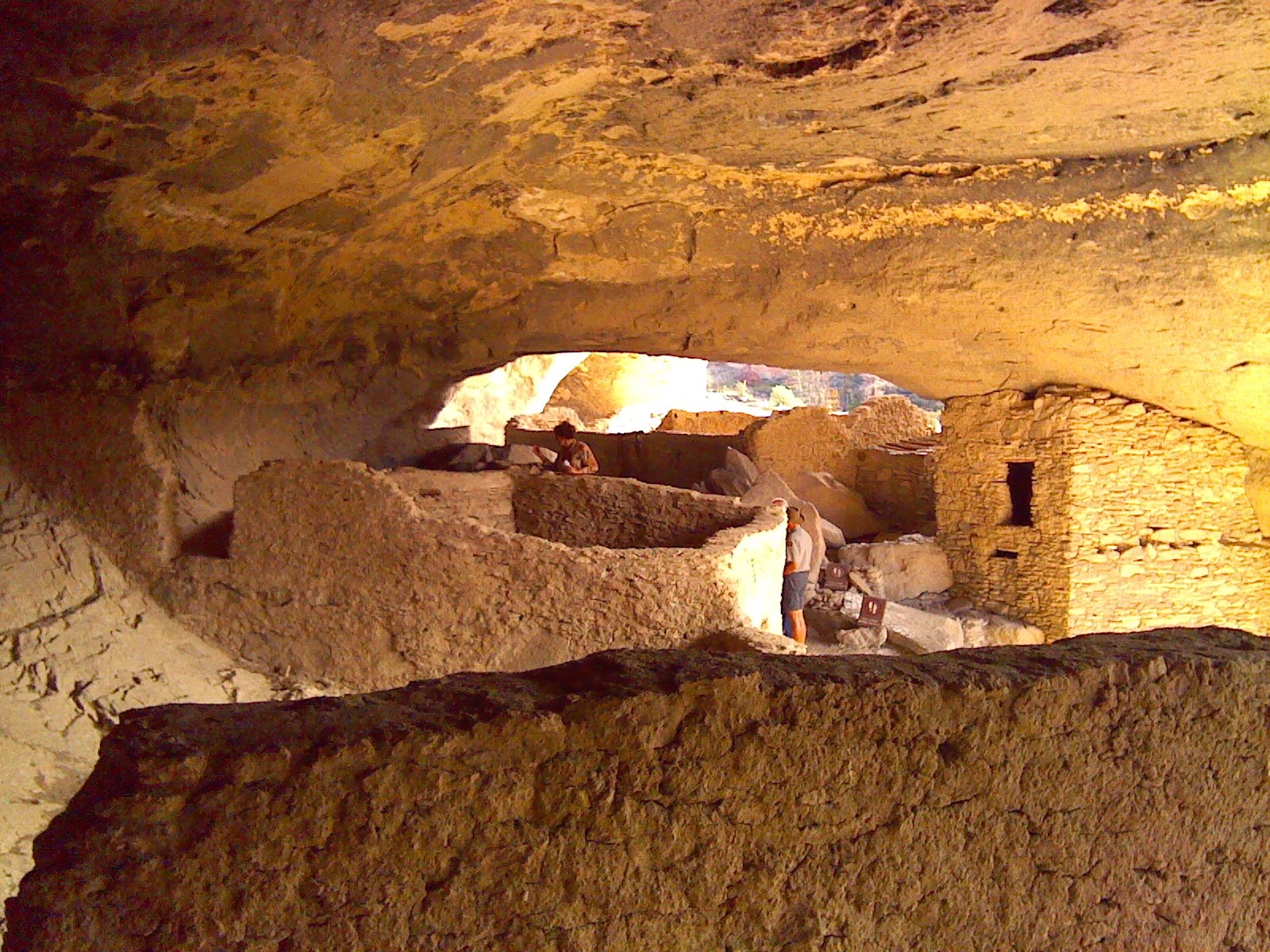 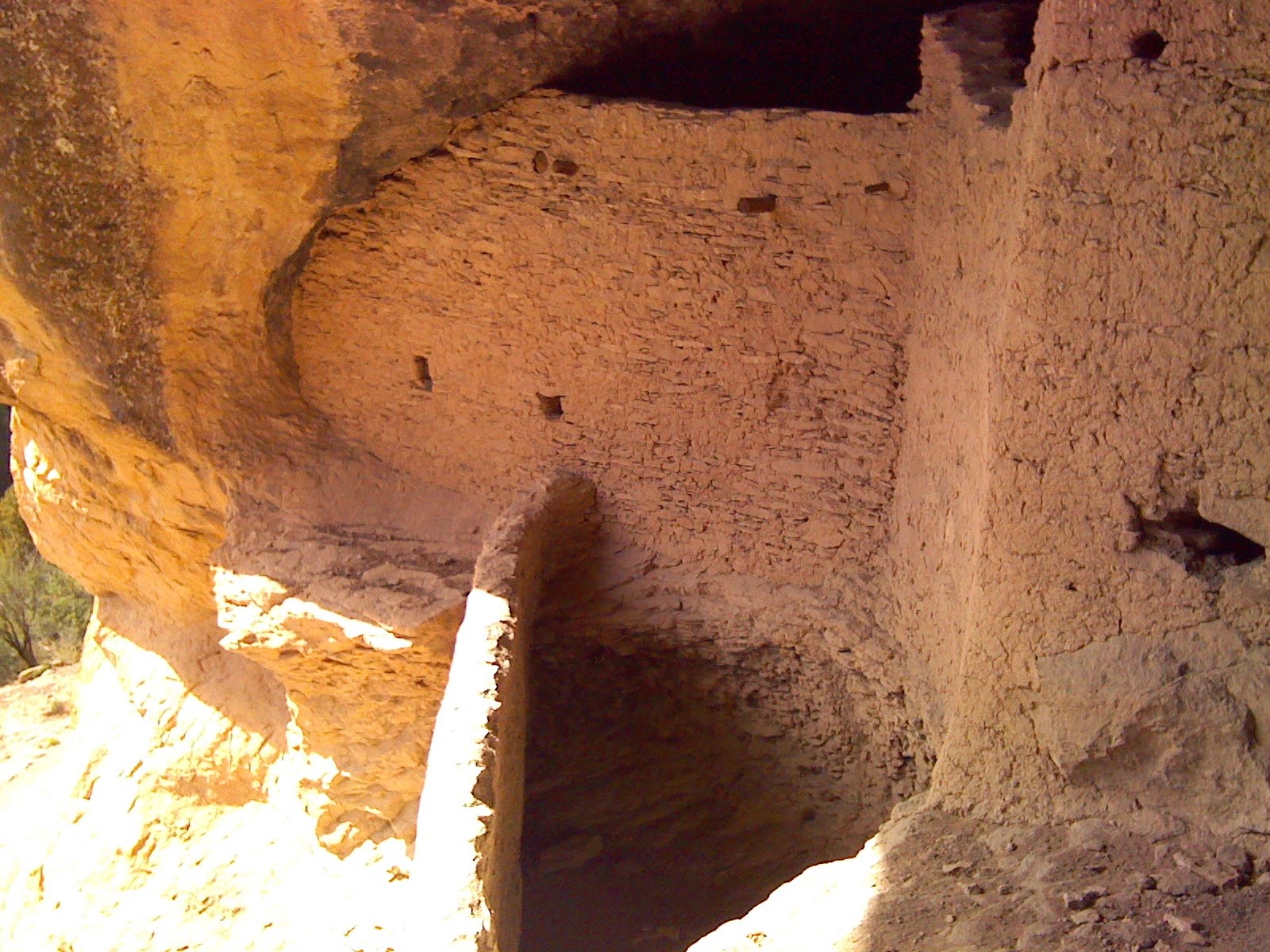 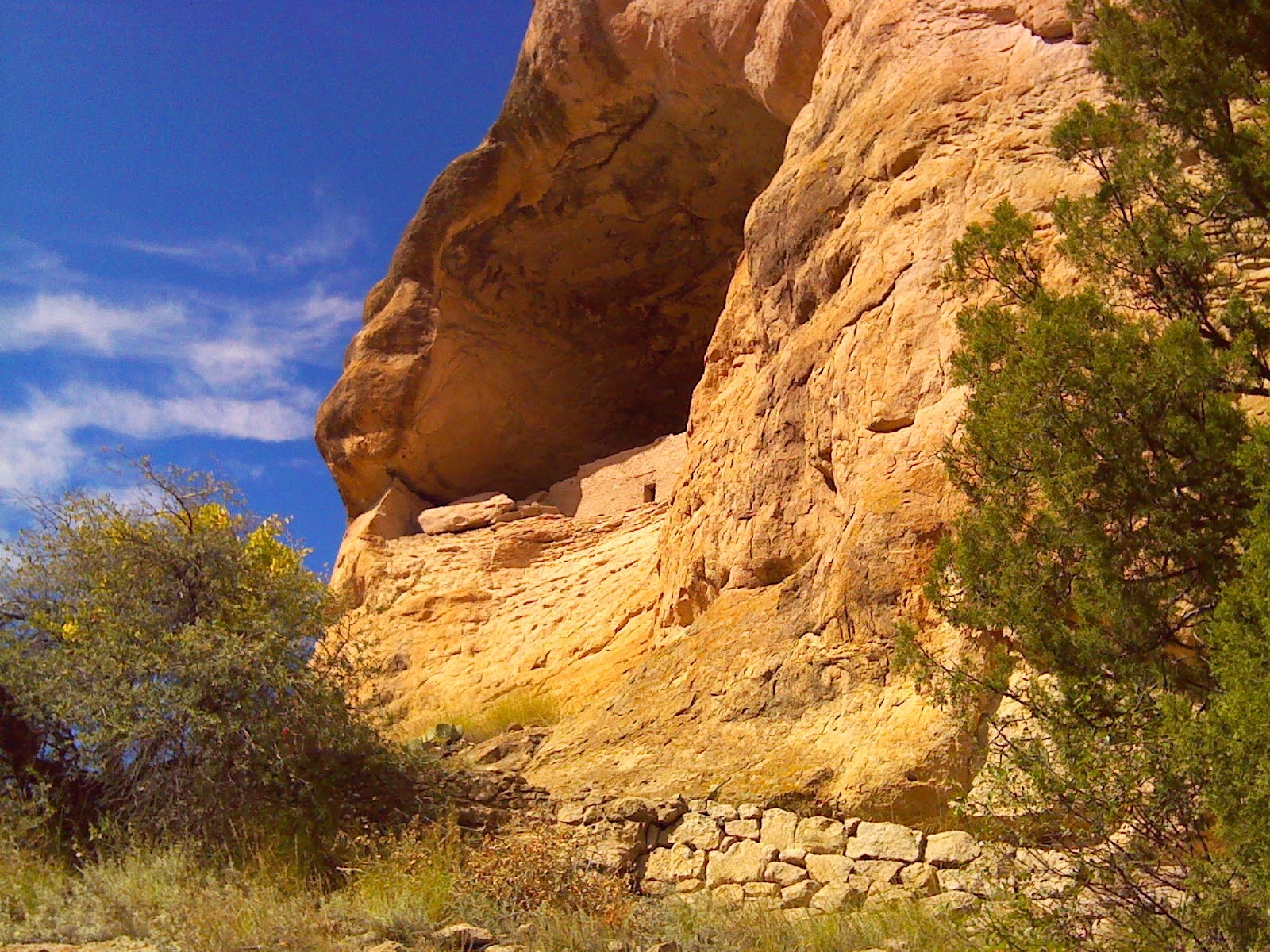 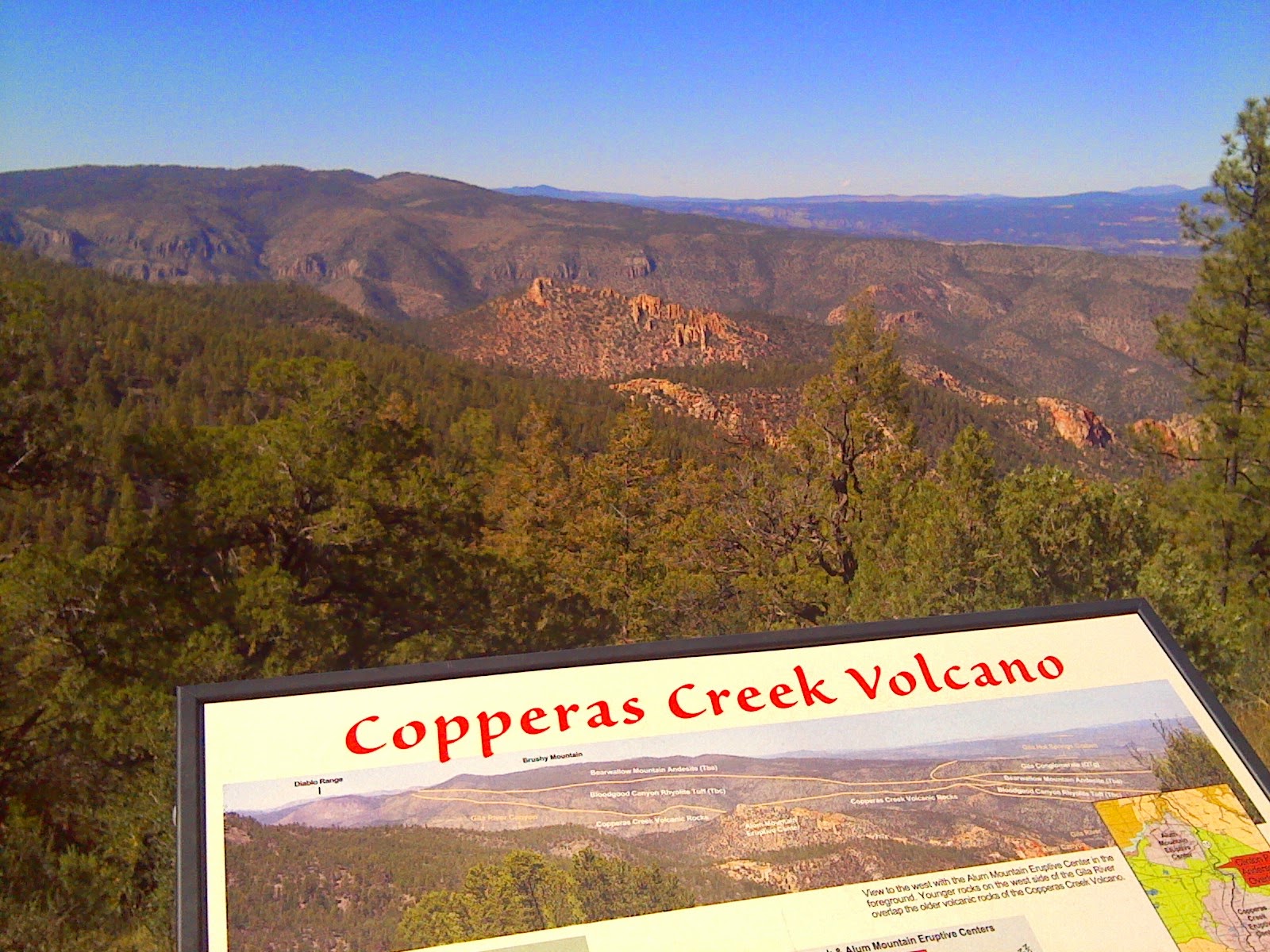 Posted by songrunner at 8:42 PM No comments: 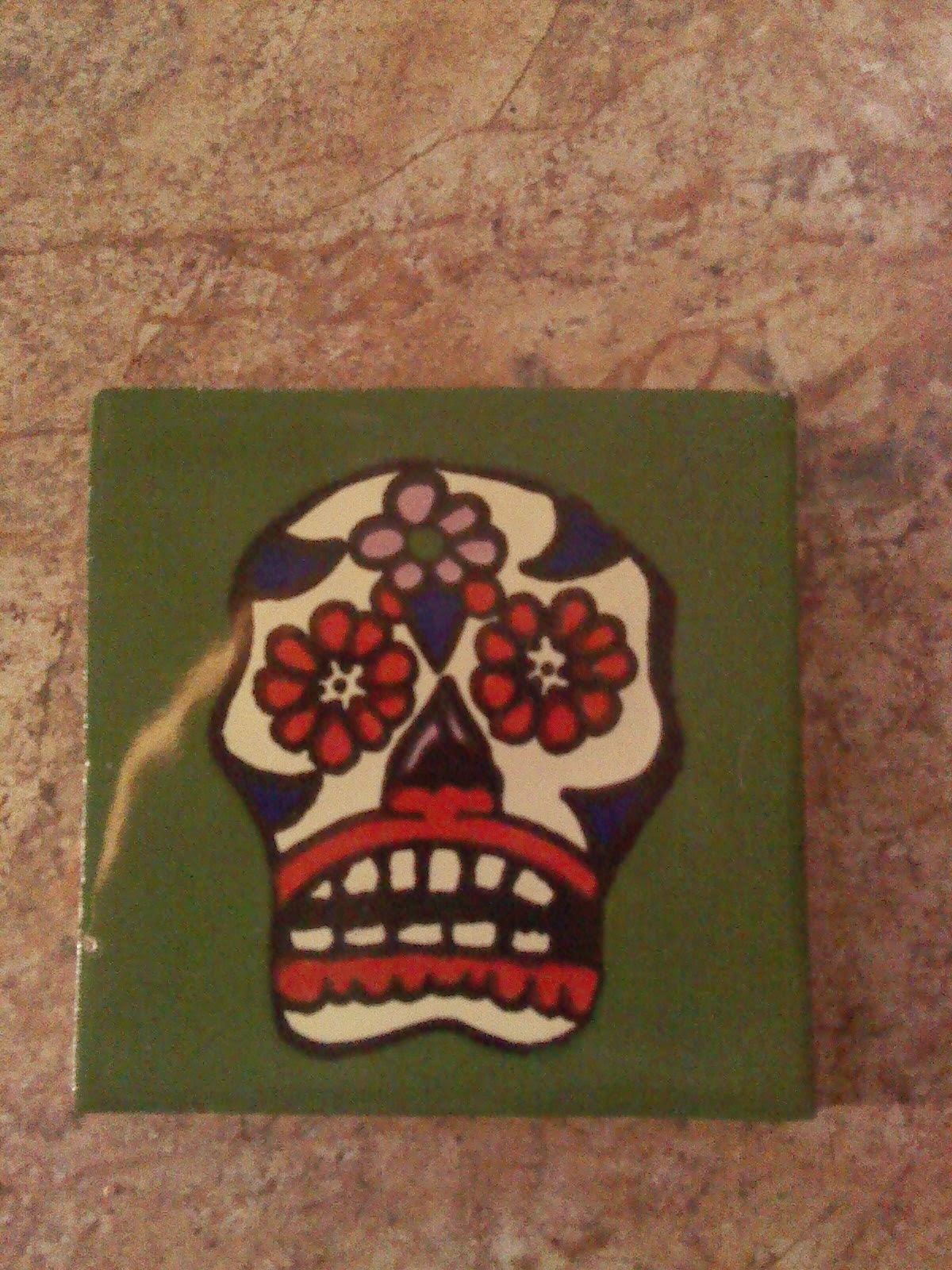 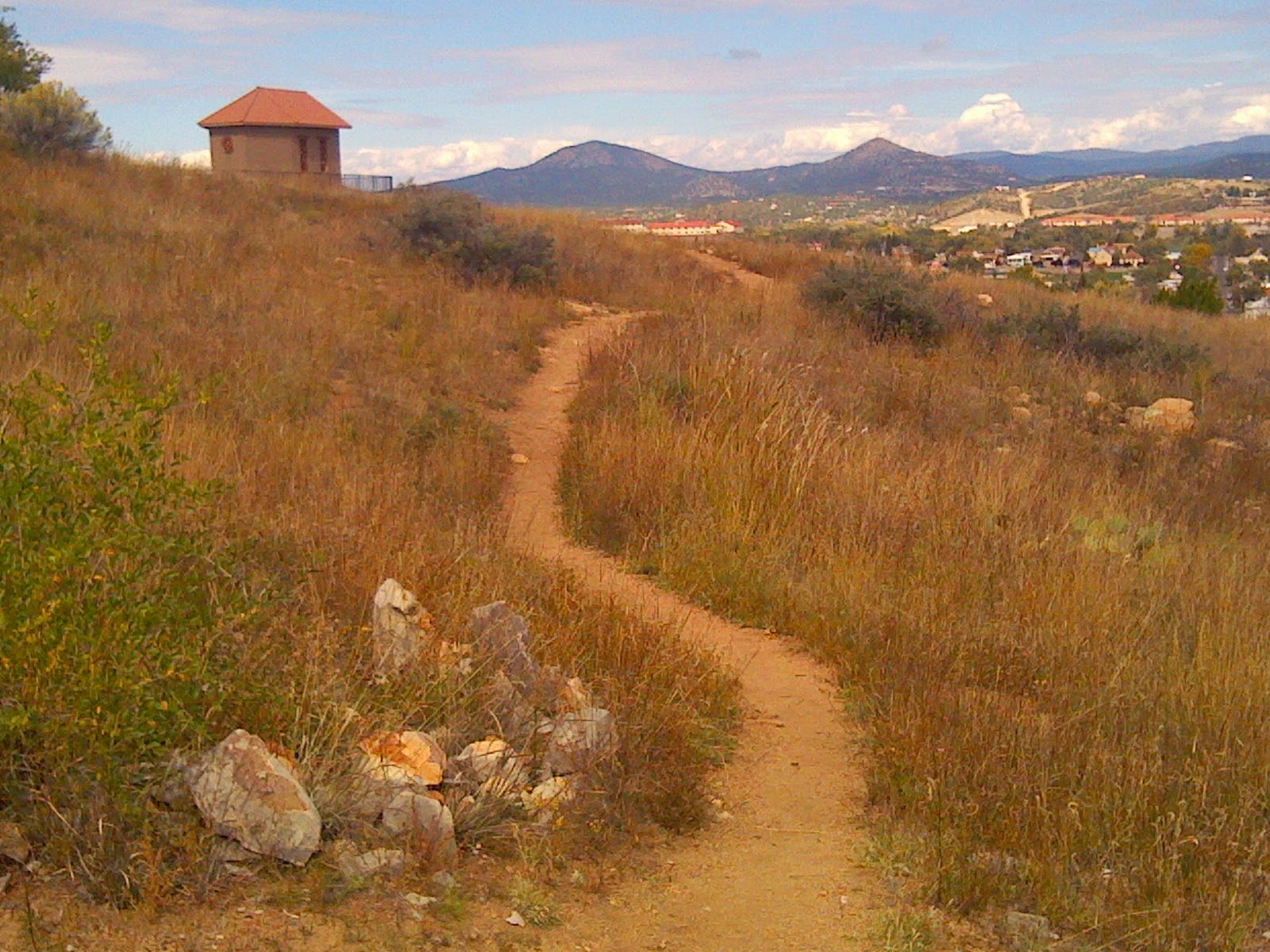 The weekend of October 25 had at least 10 races to chose from in the SW New Mexico / El Paso area . The Las Cruces races were 5ks , and after doing some very short intervals thursday I realized I would blow up in a short race . There was a 1/2M in Sunland Park which finished on a race track ( horse ) a marathon and half in El Paso . Both races involved no race day registration and the now typical big buck entrance fees . Meh . So I opted for the All Souls Urban Trail Races ( 5 & 15k ) in Silver City . With urban in the name …. how bad could it be ??

I spoke with Carlos , who owns the running store (Run Culture) in Las Cruces and he seemed to think the course wouldn't be too technical . Maybe some hills. .

The town of Silver City is about 110 miles west of Las Cruces in the SW corner of NM . At an altitude of 6000 feet it is somewhat cooler , especially noticeable at night . Western NM U is located here , along with a uniquely vibrant arts community . Like KW , it is a destination … not something you really drive through to get somewhere else,  although there is some major wilderness and ancient culture explorations to be had nearby . And hills .

The race was being run to help raise money for the town theater . And it was being sponsored by , among others , a brewpub, who would be putting on an Oktoberfest after the race . Yes .

The course started downtown in front of the theater , turned right for a block, turned left …. and went straight up (a half mile maybe) to a gate that gets you onto the trails .Since I was already toast  , I used the sharp right turn thru the gate as an opportunity to WALK . Yahoo … No O2 …. and I am just getting started . The course continued to climb and climb , making lefts and right here and there … each turn staffed by a couple of volunteers who cheerily gave you the "looking good" greeting . If I could have found the strength to vibrate my vocal cords I would have begged for ride back to the start . Shortly after passing by an old cemetery with band playing music for us , and an ambulance or two, we reached the point where the 5k and 15k split . I was so tempted . But not one runner in front of me turned for the 5k . Tell you anything ?

All kidding aside , the course was tough … very tough . But beautiful and fun . The ups were steep enough to make you walk if you didn't keep your focus . And the downs were scary enough ( steep , bumpy, and loose in spots) to make you crawl from fear …. but really for the most part , there was enough visibility so you could let it fly like an 18 wheeler in the Sierras ….  knowing there was a flat spot coming up before your wheels came off !  I found myself concentrating so hard that frequently I didn't have time to realize I was out of gas !

Great community support , interesting people … and I felt I had really accomplished something when I was done . The 2nd place finisher and I yakked for a while . He ran in sandals . And not some sport sandal . Homemade . He is doing a 100 miler next week and needed the work . "Because this is about the hardest course in the state" . Now I'm feeling even better ! 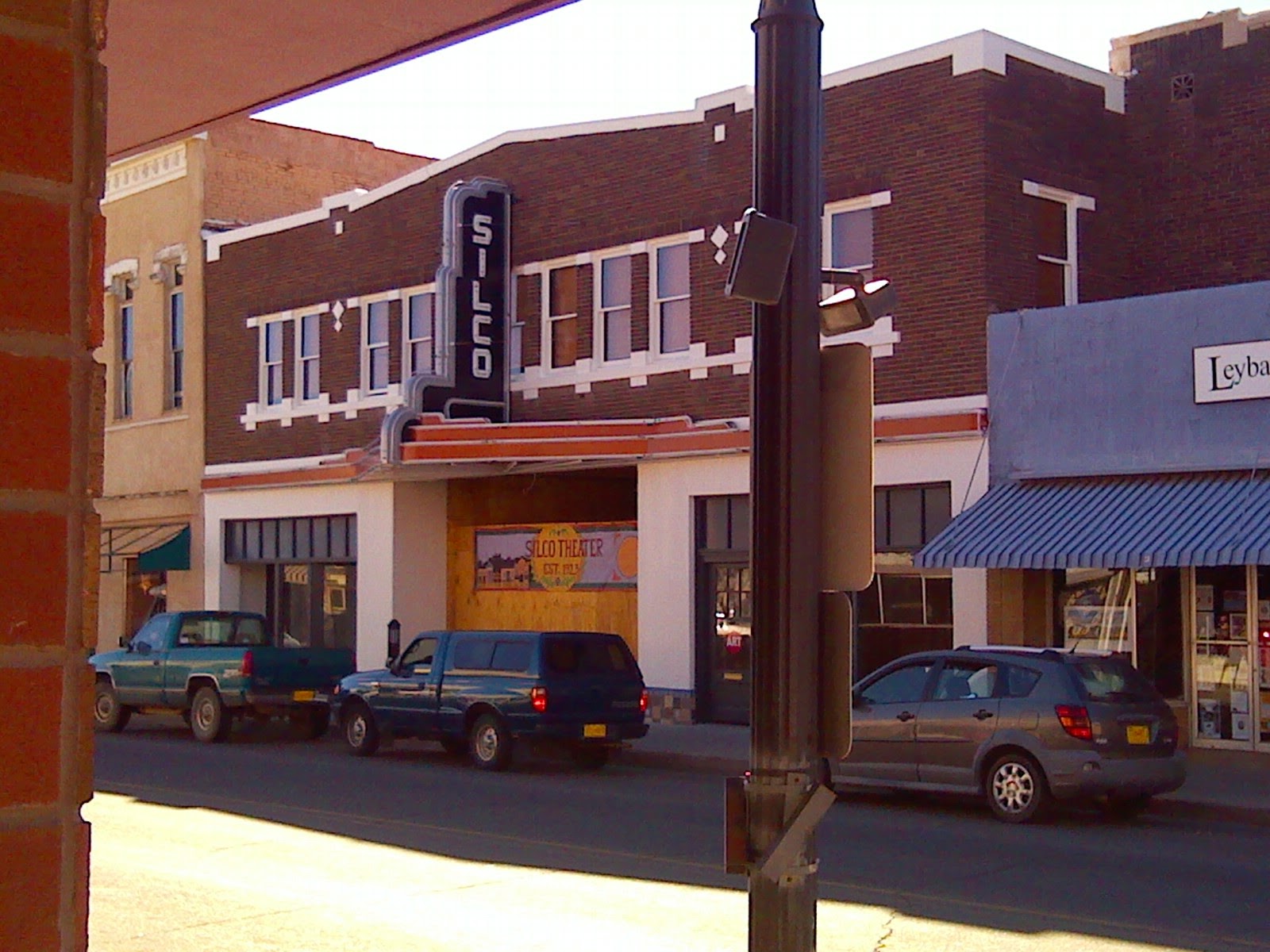 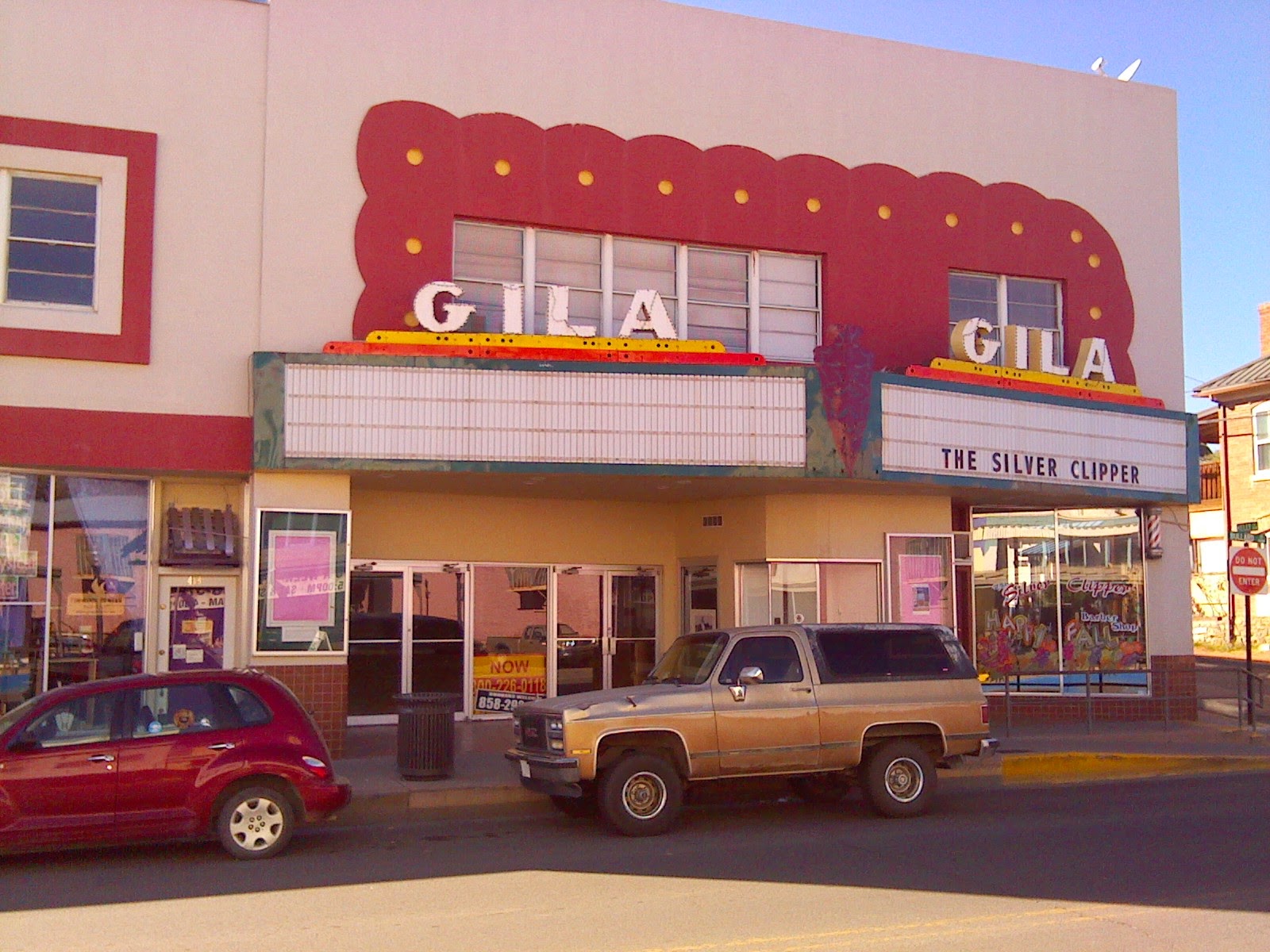 Posted by songrunner at 8:15 PM No comments: 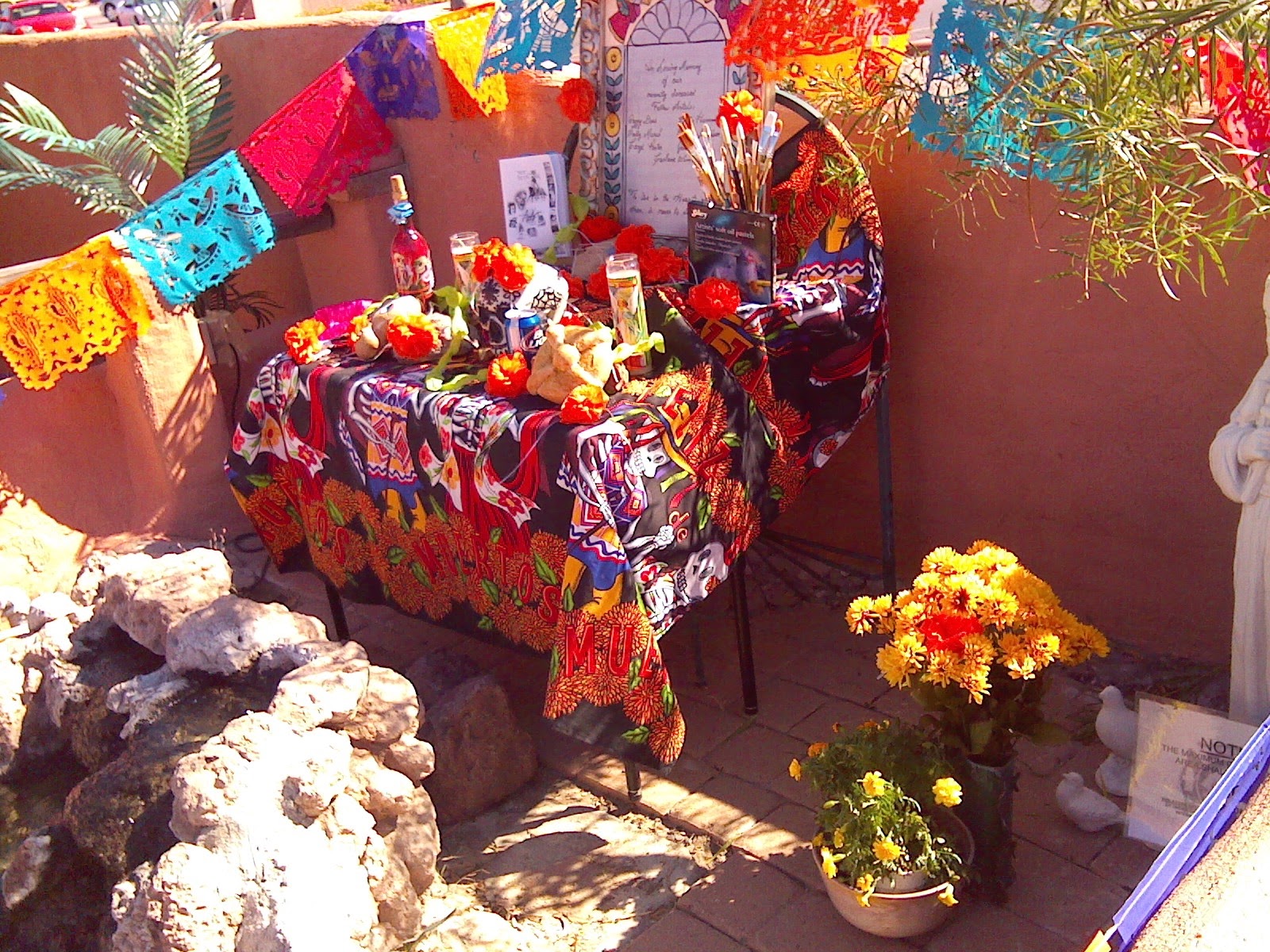 At Chaco I met a guy early one morning who, like me, was out taking sunrise pics of the Fajeta Butte  . We ran into each other again later , and swapped emails so he could send me a picture ( the one of me on my bike frozen like popsicle ) . He owned a solar company in Las Cruces, talked it up , and when I emailed him back about some RV parks he invited me stay at his place . Like most people (it seems) in the SW he had a dedicated pad with electric and water for his RV and I stayed a few days and had the benefit of local knowledge .

Because with my limited knowledge the best thing I could think of was , southern New Mexico , it must be warm . (After it dipping below 40 at night in Chaco ... I'm ready !)  And now that I had looked at a map once or twice on the trip, I knew it was on the Rio Grande . This is what I found !


Take the state university . Place it in a town near the Texas / Mexican border . We are talking desert , high desert . Surround it with mountains . Run the Rio Grande through it and give it major Ag … everything from Pima Cotton , to Pecans , Corn to Cabbage , the famous New Mexican Pepper , onions, garlic , tomatoes … grapes ! NM has a burgeoning wine industry and this is one of the best appellateions . Throw in Spaceport America , Virgin Galactic , White Sands ….and you have a lot going on for an old spanish town of 100k !

Here is a link
las cruces

Anyway, I have had a blast hiking , running , touring . I literally woke up to the wonderful smell of chilis roasting every morning from the local salsa company . Hungry !!!! 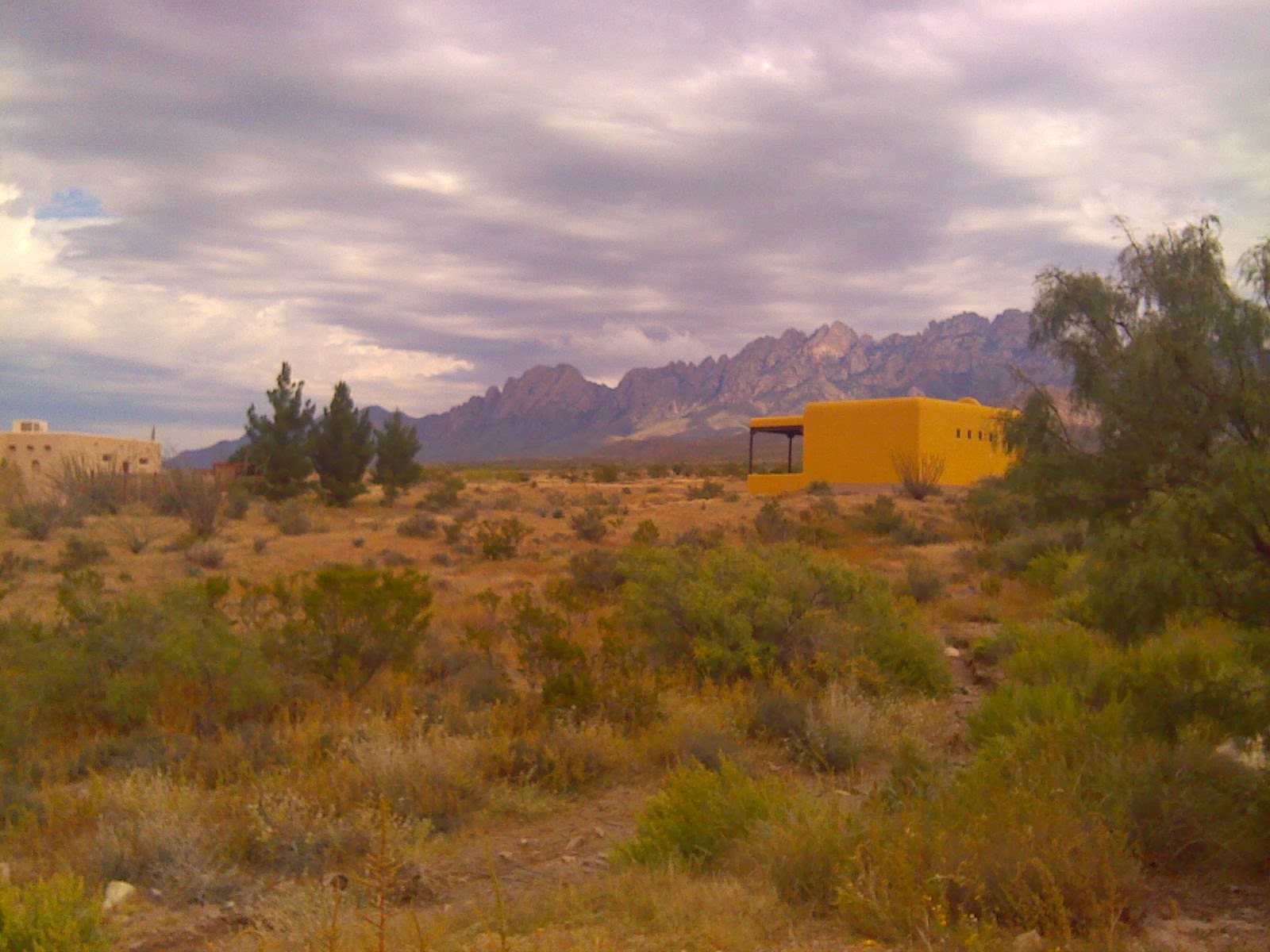 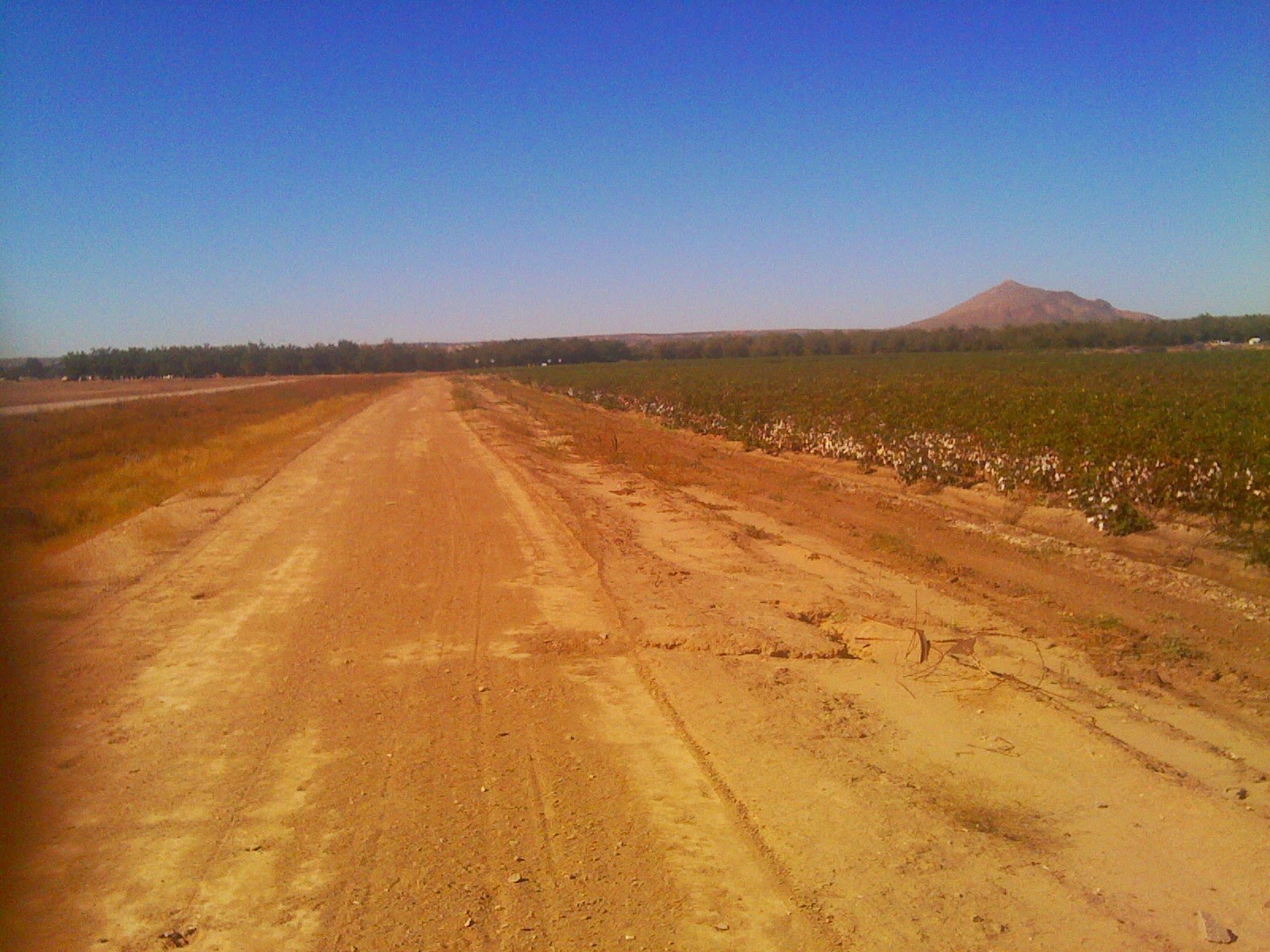 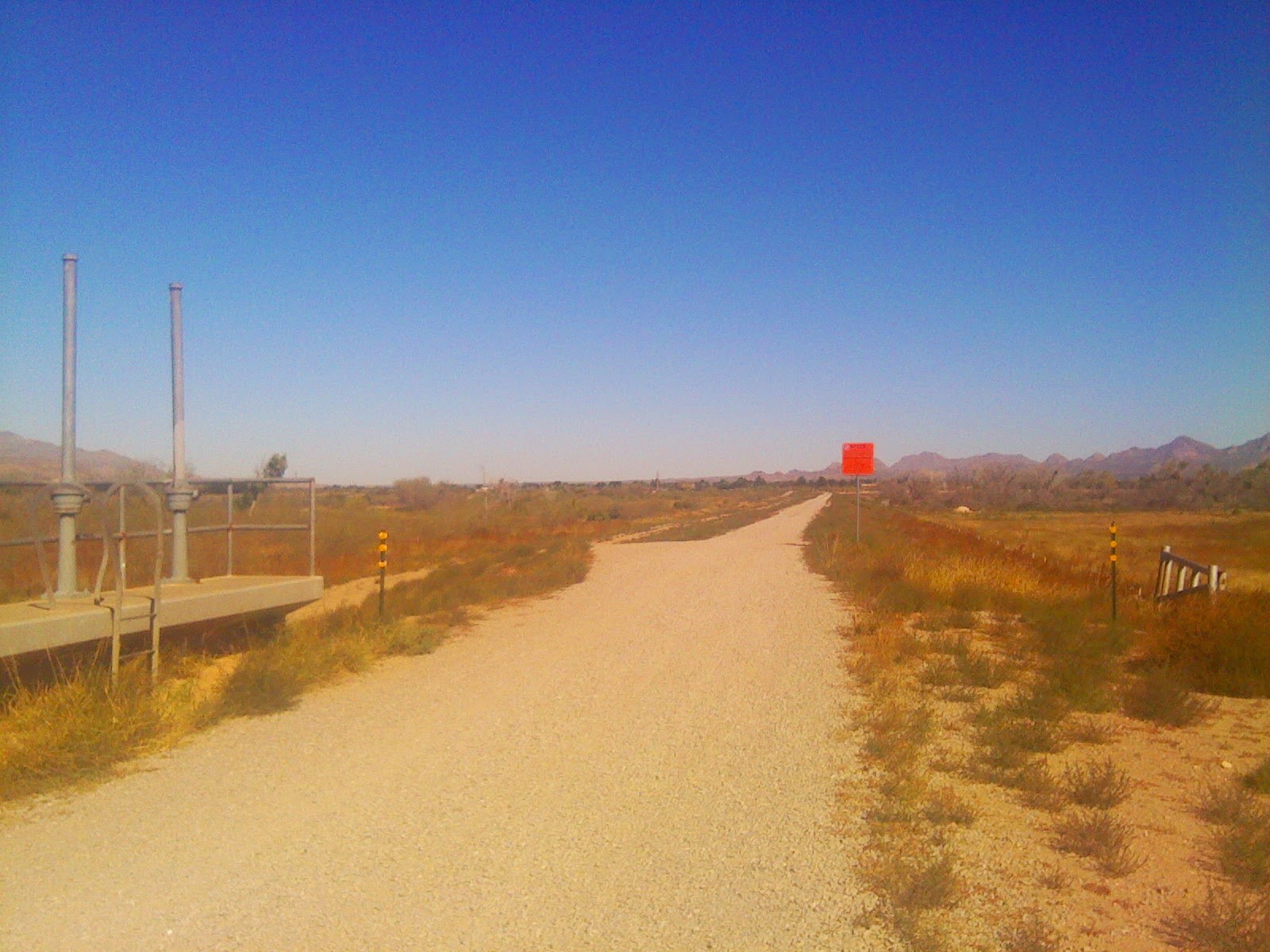 Posted by songrunner at 8:00 PM No comments: 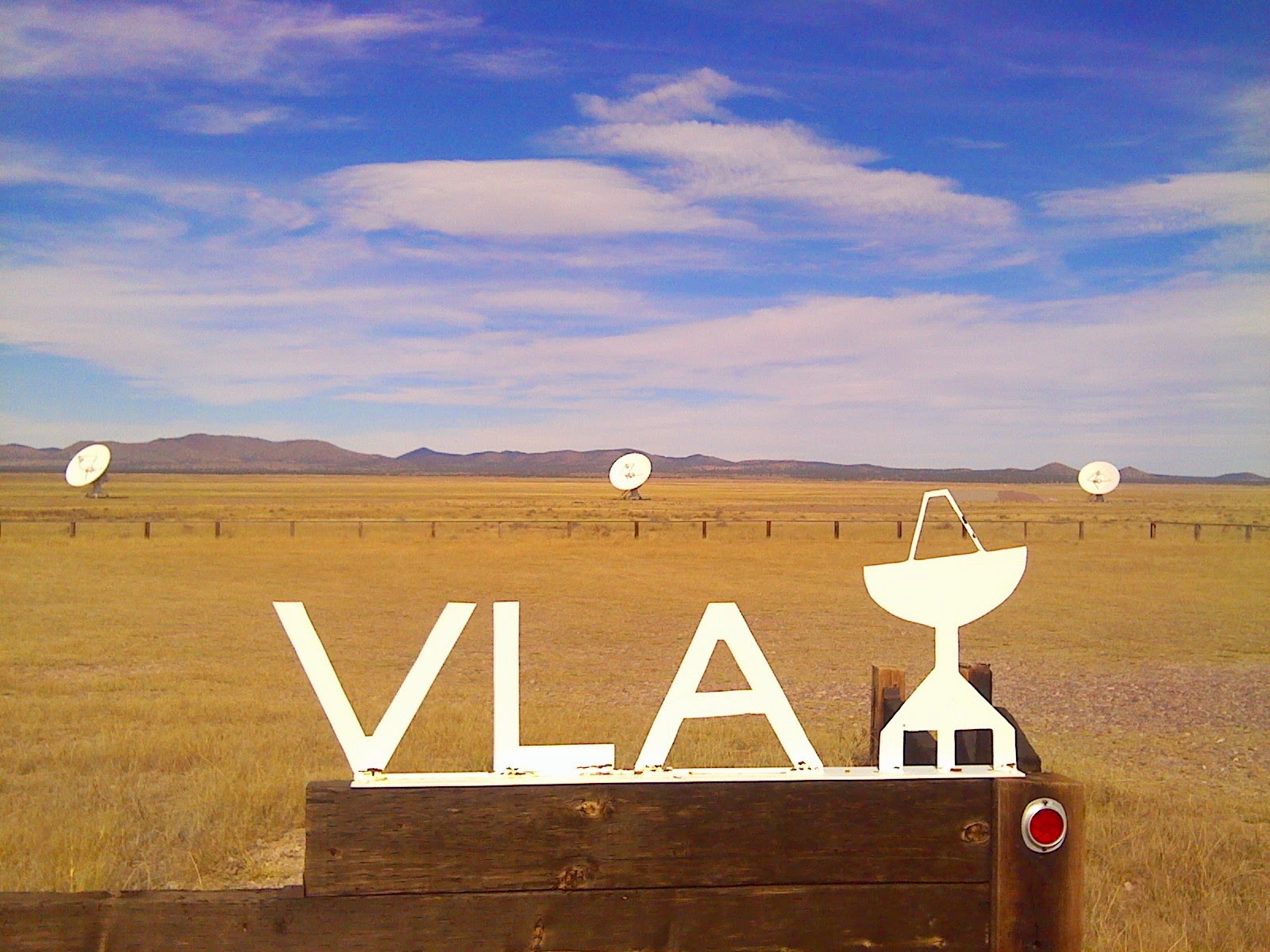 Tracy gave me this quirky ( surprised ? ) little book b4 I left on this venture titled 50 unique things to see in Florida ( or something like that ) . Like the worlds largest pile of phosphates ... or the Rodin Museum . ...which might help explain why while on a journey to National Park and Monument Paradise,  I thought of her when I drove out to the VLA . Its really cool . Large too.

It operates on a shoestring budget , which congress just slashed ( they wont even allow for enough money to put up solar ) even though it generates revenue from scientists world-wide who line up for time. But I am going to resist going after the low hanging fruit .... saving that for a special post . 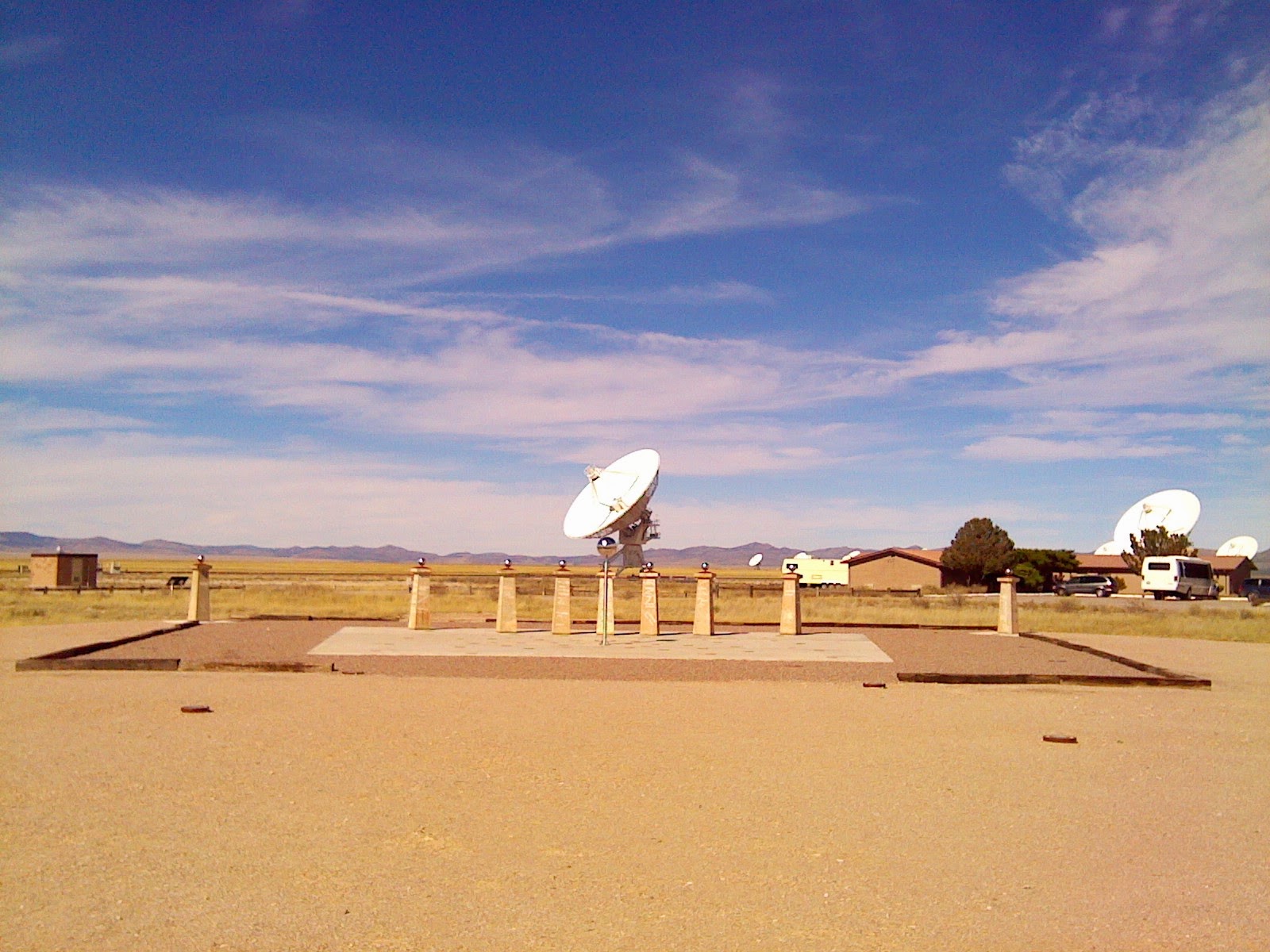 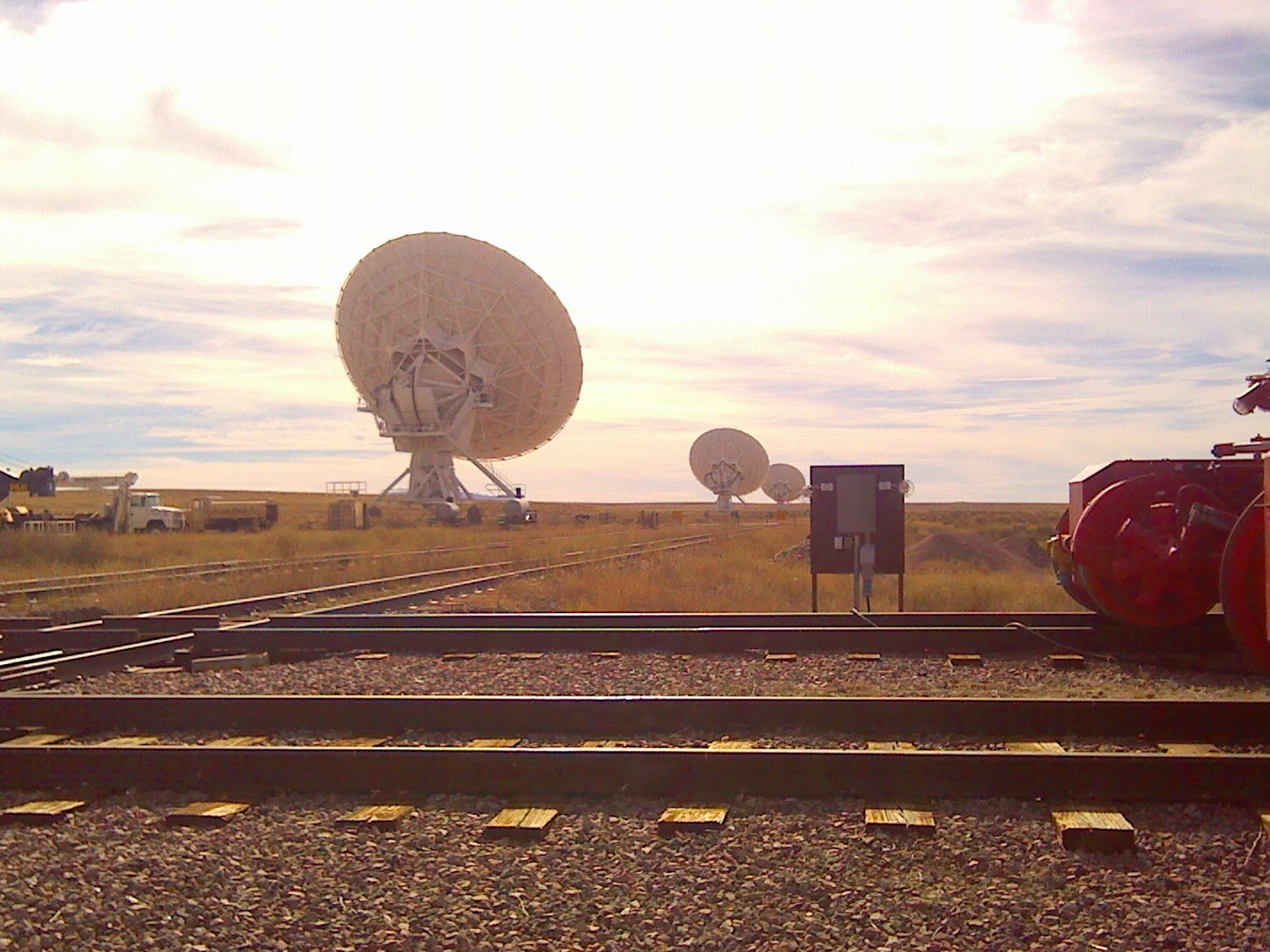 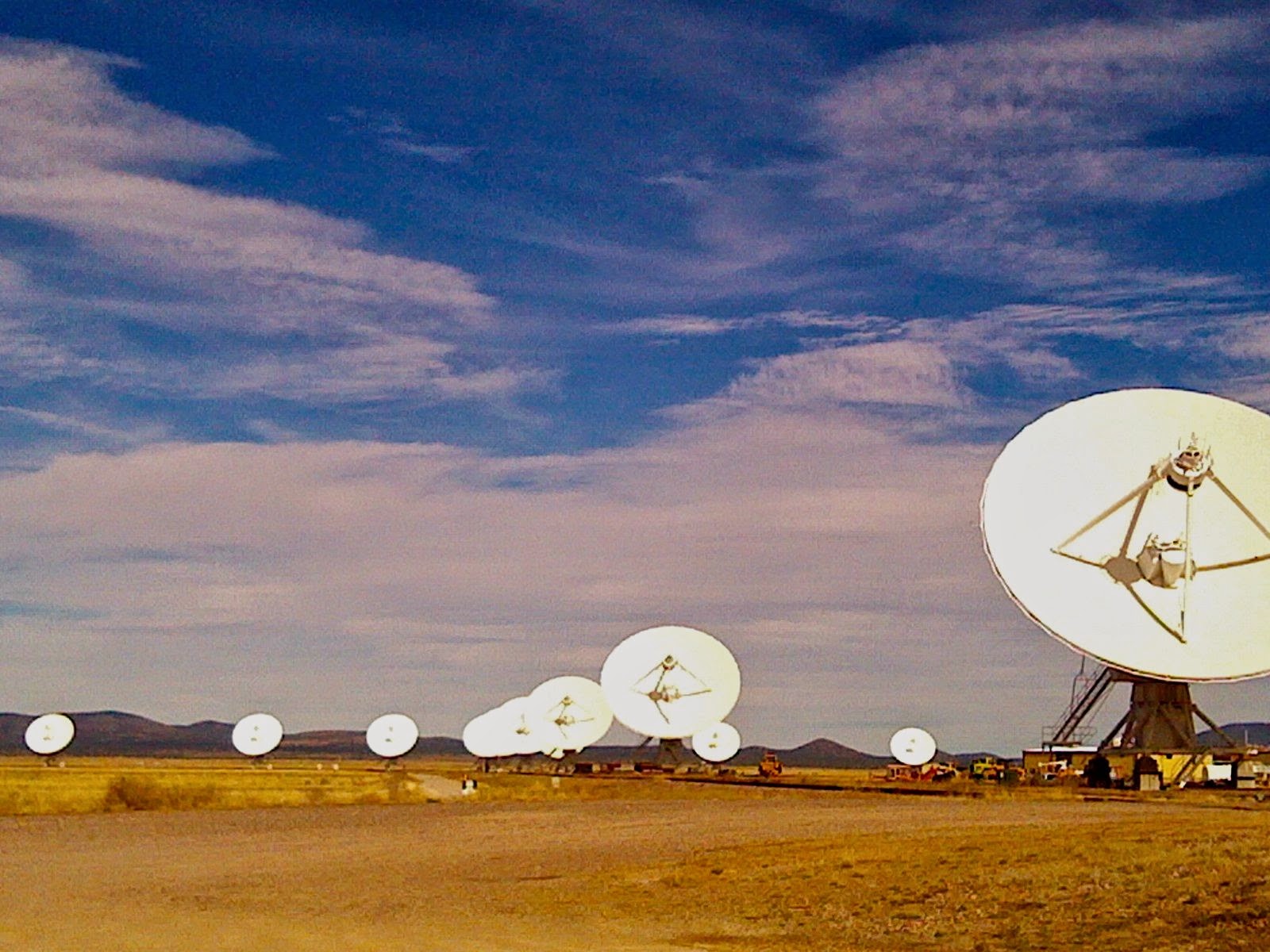 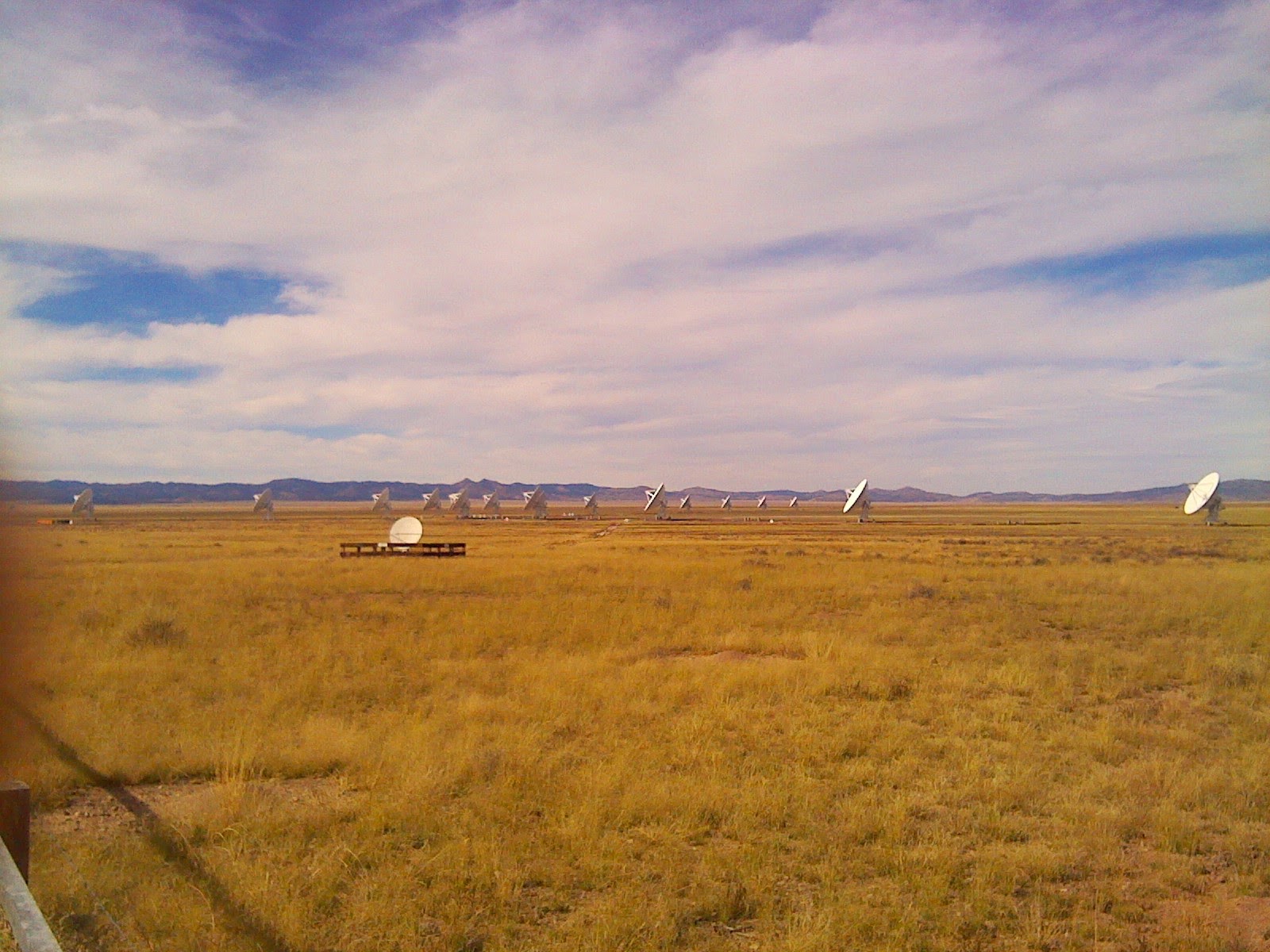 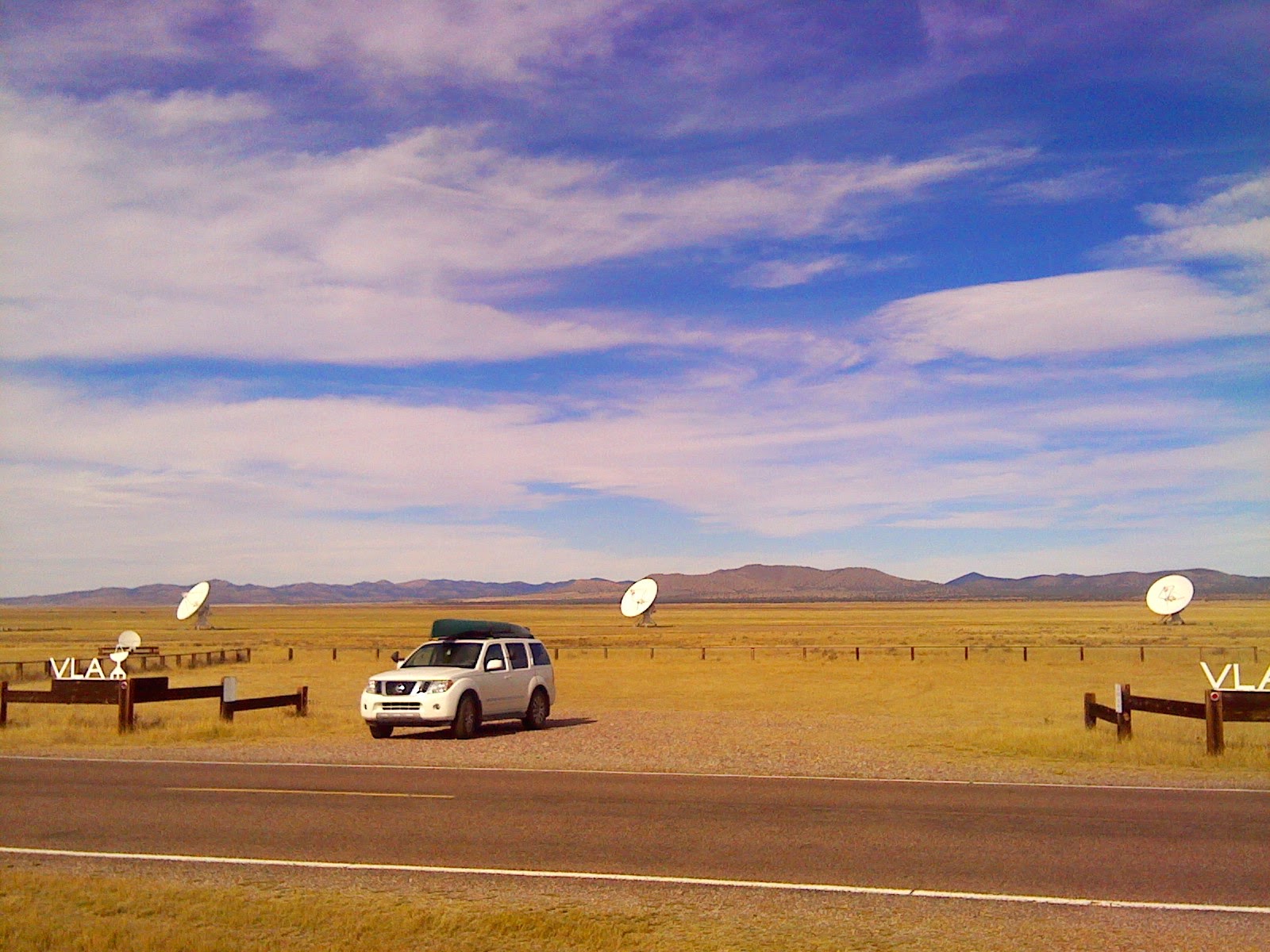 Posted by songrunner at 9:41 AM No comments: